Virtual Reality (VR) headsets were the talk of the town at this year’s Consumer Electronics Show (CES) in Las Vegas. This once niche technology is now becoming more mainstream, and could potentially become immersed in our lives, much like how smartphones have. You may have heard of some of the bigger names already involved in VR such as: Oculus, Microsoft, HTC, Samsung, and Google. The latest out of the rumor mill is that Apple is working on a VR product as its next big thing. 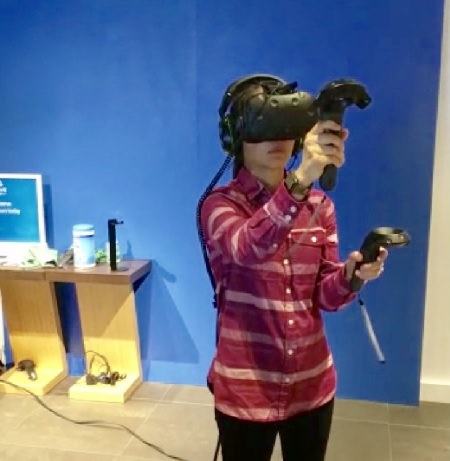 Not sure how VR works? Well, it is essentially a big headset that you wear like a pair of goggles, and it immerses you into a digitally created simulation and you could be anywhere from deep sea swimming with fish to floating in space. When you look into the headset, there are two oculars/monitors, and they each project to one eye to create the stereoscopic/depth perception effect. Not only are you able to see the environment that is projected in the headset, you’re also able to interact with it in a 3D-like world.

It’s normal to have some hesitation on whether wearing using VR would have any effects on our eyes and vision. Since you will be looking and focusing on these 3D projections at a very close distance, and presumably for long periods of time, eye strain is very likely to result. It really isn’t too different than us staring at the computer or smartphone, and studies have shown there is correlation between near work, eye strain, and an increase in myopia. Therefore, we should apply the same visual hygiene we practice when we use our computer and smartphone: the 20/20 rule – for every 20 minutes of near work, take a 20 second break and look at something far away.

It is inevitable that our future will be embedded with more technology than many of us ever thought was possible. As we’ve already seen with how many more hours we’re on the computer at school and work than ever before, it is possible that eyestrain-heavy technology will start to invade our after work/school hours more than how it is now. The key in reducing and eliminating eye strain is moderation, and as long as proper care is taken to ensure breaks are taken when we use technology, side effects should be greatly minimized. Both Dr. Chen and Dr. Bracken are tech savvy, and embrace technology both in and out of the office. Next time you’re in the office, don’t hesitate to ask questions about that new piece of technology that just examined your eyes or a new gadget you bought for your home!